Suspicions about Highland Titles director Douglas Wilson, the son-in-law of Highland Titles MD Peter Bevis, were first aroused after he put his name to an incriminating public testimonial on behalf of EHIC scam operation applyehic.org, linking Highland Titles to an operation that they really, really didn’t want the world to know about.

These suspicions were confirmed last week when it was learned he was responsible for a simply disastrous ruling against Highland Titles from the Independent Press Standards Organisation (IPSO).

Highland Titles had been offered an apology over some matters of detail in a Daily Record piece “Revealed: Highland laird wannabes fooled into thinking they have bought Scottish land in multi-million-pound global scheme”. Not content with this, Wilson took his grievances to IPSO in the hope of having the Record brought to book.

IPSO has recently published their ruling – that not even the apology originally offered is necessary!

It is hard to conceive how the ruling could possibly have shown Highland Titles in a worse light.

The ruling finds to be fair comment the Record’s assertion that buyers were “fooled” over the land sales and got “nothing”. (Highland Titles countered that buyers got a gift set, but in the context of an article about the land sales that was deemed to be somewhat beside the point.)

It includes a statement that Highland Titles does not dispute that "Scotland does not recognise a personal right of ownership”. This must have been a very painful admission since Douglas Wilson at around this time justified Highland Titles’ land sales in his lengthy and considered “Response to criticism on Twitter” thus: “The advice of our Scottish solicitors is that our customers obtain a personal right to their souvenir plot of land".  Since the Twitter debate, they have reiterated their confidence in their advice. The "personal right" was also the basis of Highland Titles' defense to the ASA of their "buy land" and "landowner" marketing. In pursuing this unsuccessful IPSO action, Highland Titles appear to have exploded their own argument to the ASA. 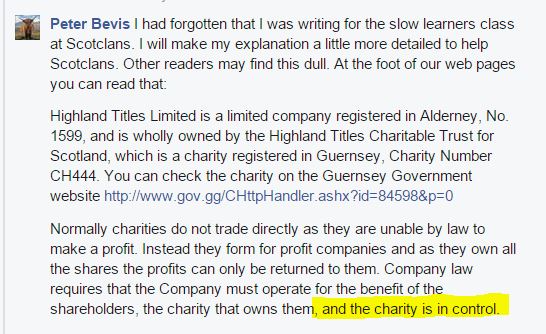 What can we say? Sterling work Douglas, keep it up. Our payment’s in a brown envelope in the usual place ;-)

Others have also commented on this affair, notably:

Posted by My Highland Estate In Lochaber at 11:38

Independent conservation company Wildcat Haven have for some time been running a campaign to have tree felling in the Clashindarroch forest...